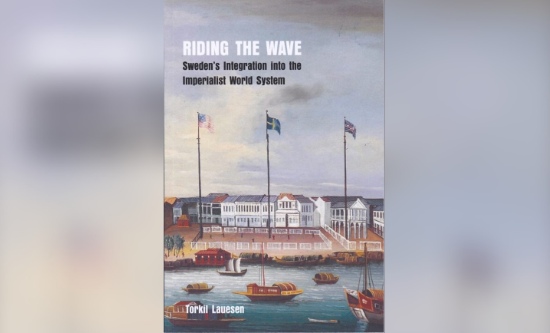 This important book by the Danish anti-imperialist activist Torkil Lauesen charts the history of Sweden ‘from 16th-century colonialism to the present day’ (p7). It is a description of the bloody foundations of what was in the 1980s one of the most socially and economically equal countries in the capitalist world. The book also places contemporary Swedish political economy in a global context: examining how Swedish capital operates today, how the Swedish working class relates to the global division of labour, and the relations between Sweden and the major powers including China and the US.

For those readers familiar with the economic and political history of Britain, the oldest capitalist country, this book provides an illuminating example of how the fortunes of a relatively minor player rise and fall with waves of global economic expansion. Furthermore, the book dispels the myth, still trotted out by British social democrats today, that the once strong Swedish social democratic movement was a model ‘third way’ ideology.

‘The rise of capitalism in Europe and colonialism are two inseparable phenomena,’ opens the first chapter (p13). Much as in Britain, though less successfully, the development of Swedish (and Danish) capitalism relied on colonial plunder. The chains and bars on Danish ships, used to transport captive Africans to the Caribbean, were made from Swedish iron – the country was the leading iron exporter in the 17th century. From 1634, Sweden also exploited its hitherto remote northern territories for minerals, forcibly recruiting and displacing native Sami people in an essentially colonial project that continues to this day. With the rise of mercantile capitalism, Sweden and Denmark controlled important shipping ventures. Today’s Maersk container shipping line is the heir to this legacy. The Swedish East India Company, founded 1731, was responsible for between 10-20% of European tea imports in its first 50 years, most of which was smuggled into Britain. Still, Sweden remained a minor player on the world stage. The merchant class secured but a foothold in the global order.

This bolstered the trend, common across Western Europe, of significant migration of poor workers and peasants to seek better opportunities abroad. 25% of the Swedish population emigrated between the late 19th century and early 20th century, a proportion surpassed only by Ireland. Swedes in their millions went to administer colonies and settlements. Emigration reduced the ‘reserve army of labour’ in the Sweden and alleviated any downward pressure on wages. In North America, Swedes later formed the middle layer of a North American working class supervised by the Anglophone labour aristocracy and supported by a ‘colonial proletariat’ of African, Latin American and Asian origin (p25). With these forces grew, in the core, trade union membership and a legal movement for social democracy.

The Swedish Social Democratic Party (SAP) was formed in 1889 with the support of trade unions. Ideologically, it drew heavily on the reformist and nationalist German Social Democratic Party (SPD). The first SAP government of 1921-1928 ‘often stood with employers on the issue of wage rates. […] The party was also willing to criticise outbreaks of violence in clashes between workers and police’ and denounced militant strike tactics as ‘offences against existing law,’ in the words of one minister (p78). Following years of wildcat strikes and a 1931 general strike, the 1938 Saltsjöbaden Agreement between trade unions and the Employers’ Association authorised the Swedish Trade Union Confederation (LO) to tame the labour movement and create a supposedly peaceful resolution of conflict between capital and labour. The forces could collaborate to attempt to maintain a high employment rate and maximise productivity. The SAP subsequently controlled government continuously from 1932 until 1976.

With the defeat of Nazi Germany in the middle of the century, Sweden lost a major trade partner. The US had emerged as the reigning super power and moved to break up Britain’s monopoly and improve its own trade position. This assisted weaker allies such as Sweden who had lost out in the previous rounds of imperialist division of the spoils. Riding the Wave details the horrific conditions endured by local workers at a Swedish mining colony in an iron-rich region of Liberia, West Africa; and the equivocation of former SAP minister Dag Hammarskjöld who as United Nations chief ‘chose to side with Belgian and American neocolonialism against the democratically elected socialist prime minister of the independent state of the Congo,’ Patrice Lumumba (p103).

Even with all this exploitation abroad, at home social democracy remained fragile. It relied on an uneasy truce between capital and labour in which capital ultimately had the upper hand. ‘This economic development,’ claims Lauesen, ‘laid the basis for rising wages and the expansion of the welfare state. There was a widespread notion that Keynesian-inspired economic policies could regulate capitalism, avoiding future crises. At the same time however, capital continued to be concentrated in fewer and fewer hands’ (p111). The first government (1969-1976) of Social Democrat Olof Palme, Lauesen claims, represents (in Sweden) ‘the pinnacle of the capitalist welfare state, testing the limits of the compromise between capital and the working class’ (p106).

The Swedish state was forced to adapt to save capitalism: from a ‘welfare’ state to a ‘competition’ state that cut taxes (and state spending) to attract multinational capital. Globally, there was a massive expansion of capitalist markets, leading to proletarianisation in the periphery and increased industrial exports from the periphery to the core. ‘Between 1980 and 2011, the size of the labour force enrolled in global capitalism grew from 1.9 to 3.3 billion people, an increase of 73% […] In the 1950s, industrial goods were only 15% of the Global South’s total exports, in 2009 they accounted for roughly 70%’ (p131).

Today’s production chains are global: things are made in the underdeveloped countries and consumed in the imperialist countries. This is precisely the case in Sweden. ‘In 2018, the 3,103 Swedish transnational companies employed 2.16 million people, 1.5 million abroad and the other 660,000 at home in Sweden’ (p148). The largest Swedish companies have a 50% higher turnover abroad than at home. As case studies, Lauesen outlines H&M and IKEA. Closer to home, Sweden and Denmark also dominate the economies of the Baltic region, having moved into the new markets opened up by the fall of the Soviet states. Scandinavian capital controls 83% of the Estonian banking sector. Swedish monopolies control 11% of Estonia’s exports, and 17% of the Estonian retail market; with similarly large interests in manufacturing, telecommunications, and finance in Lithuania and Latvia as well.

Sweden has the third highest household income in the world, with average wages 50 times higher than in Bangladesh. Much of the Swedish working class holds a stake in the system. Sweden is the country with the highest percentage of shareholders — 13% of the population directly hold them, and 75% via pension funds — people literally invested in the capital accumulation process. What remains of the welfare state, also, is funded by imperialist plunder, with even unemployment benefit in Sweden being tens of times higher than Bangladeshi wages.

While Sweden has long maintained a formal position of ‘neutrality’, its prosperity has long been tied up with being an arms economy whose arms manufactures profit from war. Weaponry is historically a key export, with the company Bofors manufacturing arms since 1646 through the era of cannon and into modern explosives.

More generally, coal and iron production in the country was sparked by Dutch wartime capital investment during the seventeenth century. It was ramped up thanks to trade with imperial Germany, a trade which continued through the Nazi period. Formally neutral, Sweden also facilitated German troop movements during Operation Barbarossa. In the 1918 Finnish Civil War the state covertly supported the reactionary ‘Whites’ out of fear a ‘Red’ victory would spread to Sweden too. SAP ministers schemed to assassinate Lenin during his transit through Sweden and Finland (then a Russian duchy) en route to revolutionary Russia in April 1917. They failed of course, by December Lenin’s government had recognised Finnish independence.

The two most important arms manufacturers in Sweden today are Saab, and the formerly state-owned Bofors (which is today a subsidiary of Britain’s BAE Systems). Sweden’s neutrality gives it licence to sell arms to almost anyone with the cash. But since the Cold War era it has maintained an unofficial alliance with the NATO/US axis of geopolitics. In 1952 it entered a secret agreement with the US to share intelligence on Soviet activities in the Baltic in exchange for US weaponry. In 1960 another secret agreement promised US support in the event of invasion of Sweden by Soviet forces. US experts were embedded in Saab to develop fighter jets and missiles. Today, the US axis moves to secure new shipping lanes in the Arctic Circle opened up by the melting ice caps; Trump’s (declined) 2019 offer to buy Greenland from Denmark being a well-publicised example.

The Scandinavian countries remain reliant on the German economy, which today dominates the EU imperialist bloc. This is epitomised by the Nord Stream pipelines designed to get cheap gas from Russia to Germany via Swedish and Danish parts of the Baltic Sea. The recent sabotage of the pipelines has damaged this link in favour of increased reliance on US fossil fuels. Sweden has blocked a joint investigation with Germany and Denmark into the cause of the explosions. Saab and Bofors, too, have made fortunes from selling arms for the US proxy war in Ukraine. Sweden and Finland are poised to become NATO’s newest members, committing them to spending 2% of their GDP on defence.

Just as social democracy, at its peak, gave way to neoliberalism, so these signs point to an end of triumphant ‘Pax Americana’ and the start of a period of overt nationalist politics and international imperialist rivalries. The Swedish embrace of the US side has coincided with the rise of a mainstream right wing. It draws working class support from those whom austerity and neoliberalism has most savagely attacked: former industrial workers who lost out from outsourcing, tradesmen forced to compete with immigrants on pay, and sections of society who depend on increasingly rationed social welfare. The Sweden Democrats party is the electoral expression of this trend. The party’s founder draws inspiration from the writings of Per Engdal, a supporter of Hitler who helped Nazis flee the Nordic region after the war and attempted to reconstitute the European fascist movement in Malmö in 1951.

Meanwhile, higher paid sections of the working class have been peeled away from the Social Democrats by homeowner-friendly policies and promises of tax cuts advocated by the likes of the Liberals and the Moderates. The former Swedish Communist Party has renamed to the Left party and takes up old Social Democratic positions. So in effect the whole parliamentary sphere has shifted to the right. There is no large radical or militant socialist movement to expose the folly of parliamentarianism. None of the parties call into question Sweden’s place in the imperialist world system.

Lauesen concludes by stressing that communists in imperialist countries must recognise that significant sections of the working class benefit from imperialism. Their short-term interests align with the interests of the ruling class. A century of Swedish working class support for reformism proves this. Interpreting for today the rallying cry of the Communist Manifesto — ‘Proletarians of all countries, unite!’ — requires the organisation of a movement that opposes the current system in its entirety: opposes the imperialist division of the world’s working class and opposes the plunder of its global supply chains.

Slingshot
Slingshot Pocket Organizer 2023
Sold Out
View
Back to News